How to win big on slots

If you’re involved with playing online slots on a regular basis, you probably know and understand that the house is going to win in the long run if you look at the bulk of all play coming from all players over time. With that having been said, that doesn’t necessarily mean that all players are going to lose individually, especially if you take into consideration the ones who pick up big jackpots or who go on massive winning streaks.

It’s completely possible to adjust your game selection and betting style to boost your chances of being a big winner at the expense of taking more frequent small or medium losses, and that’s the approach that many players want to take. It’s a “go big or go bust” type of mentality, and it’s the same mentality that draws a ton of players to the slot machines to begin with. Here we’re going to outline the basic approaches you can take to form up this type of strategy for slots.

What slots should you play if you are going for the really big wins?

There are several online slots that are capable of paying out several thousands times your stake on a single spin or in a bonus feature. One of the most popular ones is Dead or Alive from NetEnt, 300 Shields from Nextgen and several of the Big Time Gaming slots such as Bonanza and White Rabbit to mention a few. 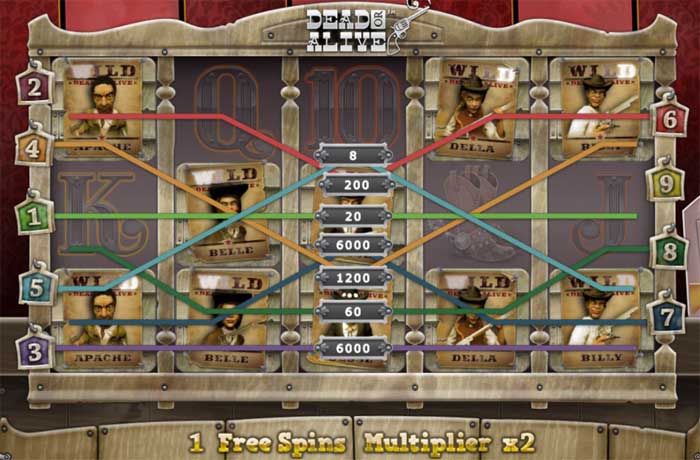 Make sure you get paid if you win big and play at a trusted online casino. We highly recommend Rizk to our readers. They offer fast payouts, no matter the size of the win, and they are run by a trusted company called Gaming Innovation Group.

Understanding the need for volatility when playing slots

Volatility (also called variance in other games) is the best friend for the slots player who is looking to get better chances to win big. If you understand volatility and how it contributes to your chances of taking down big payouts, then you’ll understand the foundations of the type of strategy you’ll need if this is your goal.

Consider a very simple comparison of games. In our first game, we’re flipping a fair coin that has a 50 percent chance to land on each side. If it’s heads, you’ll double your bet, and if it’s tails, you’ll lose your bet. On a single throw of the coin, you can only win back a profit worth the exact same size of your bet, but it’s a fair game otherwise.

Now consider a game where you’re rolling a 20-sided die. If you roll a 1 through 19, you’ll lose your bet. However, if you roll a 20, you’ll win 19 times your total bet. On average, you’ll still have an even money bet here, just like the coin flipping game above. With that having been said, the volatility of the die-rolling game is much, much higher, and along with that comes the ability to win a much larger payout. Your chances of winning are smaller, but the prize you can win (19x compared to 1x) is several times larger.

This gets to the essence of why a higher level of volatility is needed if you want to have better chances to pick up big wins in slots. The dynamic works exactly the same way where a higher volatility means a small chance of taking down bigger payouts than what would be available otherwise.

The interplay between volatility and house edge in slot machines

No matter if you want to call it slots volatility or variance, you’re talking about the same thing. However, house edge is something completely different, and that has to do with how much you can expect to be paid back out of the money you put into a game. In slots, we quantify the house advantage with a figure called RTP, or the return to player percentage. For example, if a game has a RTP of 97 percent, then that means for every €100 bet on the game, it will pay out €97 on average in the long run.

With that having been said, volatility tells you how much more or less than this average RTP you can expect to see in wins or losses from your play. As you can see in the coin-flipping and die-rolling games we mentioned above, they both had a house advantage of zero (or an RTP of 100 percent), but you could still end up with wins that are pretty large in the die-rolling game because it had such a large volatility. You couldn’t in the coin-flipping game so much, and that’s the essential difference.

The larger the RTP, the better your chances are of coming out as a winner on average. However, you still need a high volatility regardless of what the RTP percentage happens to be if you want chances to be a big winner at all in the game. This plays out just like you see with the difference between the coin-flipping example and the die-rolling example.

Aside from playing games with a higher volatility, you can also play for higher bets than you normally would if you really want to go for a big win. A 1,000x payout might be worth €1,000 if you’re betting €1 at a time, but if you’re playing for €5 per spin instead, then it increases in size accordingly. The advantage to this approach is that you increase the amount you can win on a given spin. The disadvantage is that you put yourself in a position to go broke faster.

In effect, it’s actually just another way to increase the volatility of a game in sort of a manual way with respect to the size of your bankroll or account balance. You increase your chances of getting bigger wins while increasing your chances of going broke more quickly.

There are plenty of ways to go about this that can be considered half-measures in one way or another. A popular approach is to split up medium-sized wins into two parts: The first part you are willing to lose by wagering through it at a higher bet size, and the second part you play through at your normal bet sizes and let it pad your account balance normally. This approach requires hitting a medium-sized win in the first place, and it effectively allows you to roll a big part of a win over into opportunities to take down some really huge payouts instead.

A lot of players have bankroll management guidelines that they keep in mind when they play slots. For many, these guidelines change slightly based on the volatility of the game they’re playing. For example, they might deposit €200 and use bet sizes of $1 per spin as a maximum for low-volatility games and €0.50 per spin as a maximum for high-volatility titles. If you want to really boost your chances of winning bit when playing slots, something has to give because you can’t increase your ability to pull huge payouts without sacrificing something in return.

What it boils down to, yet again, is that you have to add volatility to some degree, relative to your bet size, if you want to boost your chances of getting bigger payouts. You also have to realize that this comes at a price, and that price is usually that you sacrifice chances to get small or medium wins. You see this a lot with games that have one large jackpot, just as an example, without many medium wins available. You exchange having a smaller chance of winning in general for a bigger chance of picking up a particularly large win when you do come out on top.

Some of the games that have the highest levels of volatility (or variance) in the slots world are progressive jackpot slots. The basic idea is that a top jackpot will seed at a specific value, and a small part of each bet is added to that jackpot, causing it to get bigger and bigger. This continues until someone wins it, which in turn will cause the jackpot to reset at the seed value. The process then continues over and over again.

This might sound like a great opportunity to play a game with a huge payout built right in, and it’s even better that you can often play these games with small bet sizes as well. With that having been said, there are a few trade-offs that you take part in when you sit down to play one of these types of games.

The first trade-off is that the size of your bet is often directly proportional to the chances of you hitting the jackpot. This makes sense in order to keep things fair for players at all different stakes, but it also negates a lot of the advantage of being able to qualify for big jackpots for such small bet sizes.

The second trade-off is that you’ll often have a much smaller RTP percentage than other types of high-volatility slots, particularly when the jackpot is small and near the original seed size. You can largely get around this by keeping up with the current jackpot sizes for a few different progressive slots and only playing with the ones that are large relative to their seed sizes since the RTP increases accordingly.

The third and final trade-off is that a lot of progressive jackpot slots don’t have much in terms of features or static bonuses, so you’re playing what could be considered a one-trick pony. What we mean by this is that, if you don’t hit the progressive, you have little chance of breaking even in your session or making enough small wins to keep your account balance afloat in the meantime.

Putting it all together – how should you play if you want to win big on slots?

The bottom line is this: If you want better chances of hitting big wins when you’re playing slots, you have to give up something in return. This is generally chances of getting small or medium wins, but it can also come in the form of bigger swings overall. This is what naturally comes along with playing games with a higher level of volatility or with making larger bets than you normally would, but that’s what you need to risk if you want to get improved opportunities to hit bigger payouts in the slot world.